The Working Groups of the Sustainable Development Committee

The Services Working Group was established to address power and water supply issues, as well as infrastructure developments and maintenance, and waste management. Intermediate and long-term power supply security, the sourcing of sufficient quantities of bulk water at viable and cost-effective tariffs, waste management and transport infrastructure are the key issues this Working Group is dealing with. In 2021, the Services Working Group continued to receive feedback on the planned NamWaste hazardous waste disposal site, and followed the process to establish new government infrastructure for water supply of the central coast closely. The latter is of outstanding importance for the Namibian uranium industry, as developments triggered by a rising uranium price will require additional water. The NUI director therefore also participated in the Chamber of Mines Water Committee, which launched a study into the potential loss of economic opportunities if the required water infrastructure is not established timeously. The Working Group also regularly considers the conditions of the roads in the region with an emphasis on the B2, and gives feedback to the Erongo Region Road Safety Forum.

Members of the Services Working Group During 2021, the Radiation Safety Working Group addressed the accreditation of the Trace Element Analysis Laboratory (TEA Lab), which was achieved during the course of the year; the period required for radiological monitoring after mine closure; the calibration of radiation monitoring equipment; similar exposure group monitoring; and handling of radioactive waste. Special engagements took place with the National Radiation Protection Authority, where regulations with reference to decommissioning are developed under the Atomic Energy and Radiation Protection Act (Act No 5 of 2005). As regular items, the Working Group assisted the Ministry of Mines and Energy’s Geological Survey of Namibia with the sustainability of the radon monitoring programme, and identified new risks.

The year ended with an Emergency Spill Drill at the railway line to the Rössing Uranium Mine. Since Namibia has witnessed a dramatic increase in train derailments, the scenario was that a train transporting a container filled with drums holding uranium concentrate derailed. The container door broke open on impact and one drum containing uranium concentrate opened, causing a spill of uranium concentrate next to the railway line. The objective of the drill was to demonstrate the emergency response capabilities of the relevant officials. Affiliated members from the transport sector also participated. Members of the Radiation Safety Working Group and officials from the National Radiation Protection Authority (NRPA) observed the drill, which was once again a mutually beneficial exercise. During the course of 2021, the Water and Air Quality Working Group addressed the Regional Water Quality Database and its migration to Q-GIS; air quality training, the planned state-owned desalination plant; the potential of establishing a Basin Management Committee for the lower Swakop River; and the air quality monitoring done by the Ministry of Mines and Energy’s Geological Survey, with which a close working relationship was maintained. PM10 dust samples analysed during 2020 had been collected under south-westerly wind conditions. Another sample was therefore collected under severe east wind conditions and in an easterly suburb of Swakopmund, and again analysed with a Scanning Electron Microscope at the Namibian University of Science and Technology (NUST). The same sample also underwent a chemical analysis. Both analyses showed that no uranium and uranium compounds were present in the dust. The training programme with regular lectures continued.

Members of the Water and Air Quality Working Group 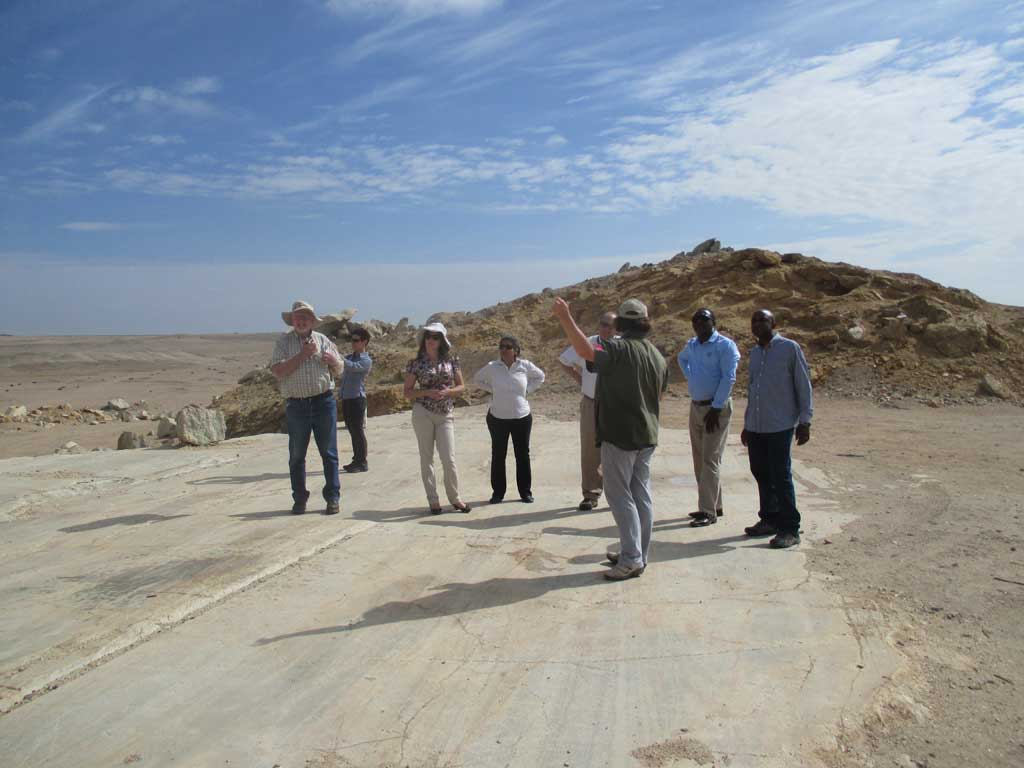 The Swakop River Farmer’s Working Group is a special interest group that deals with NUI’s stakeholders farming in the Swakop River valley downstream of the mining operations. Farming in the immediate vicinity of mining operations can potentially lead to conflicting situations, such as competition for water, or concerns about the water quality. Indeed, the Swakop River farmers utilise a source of groundwater for some of their irrigation schemes, which is also utilised to a certain, albeit small extend by the uranium mines, and a coordinated approach is therefore required. Meetings are held to give information about projects and mining operations to the farmers, as well as to avail them an opportunity to raise any concerns they might have.

The work of the Swakop River Farmers’ Working Group was once again negatively impacted in 2021 by the COVID-19 pandemic because of extended lock-down restrictions, and only one meeting could be held. The communication strategy developed by NUI’s Communication Technical Advisory Committee in order to assist the farmers with marketing of their products needed to be postponed once again. However, the joint research with NUST on water infiltration and the soils of the Swakop River valley continues and a full-time M.Sc. student is working on the project.