The Namibian Uranium Association (NUA) is the representative body of the Namibian uranium industry. Through research and provision of factual information, the NUA supports policies that let uranium compete as an energy source appropriate for our modern society, taking into consideration the need for a low carbon footprint as provided for in the Paris Agreement. Members of NUA include all Namibian uranium mining operations, most of Namibia’s leading uranium exploration companies, and associated contractors.

The affairs of NUA are managed and controlled by a Board of Trustees. The Board is currently chaired by Johan Roux, Managing Director of Langer Heinrich. NUA is the leading point of contact for government, media, stakeholders, the general public and anybody interested in the position and policies of the Namibian uranium industry. NUA promotes industry’s adherence to strong sustainable development performance, product stewardship and compliance with the Namibian legislative framework.

Stewardship is an ethic that represents the careful and responsible management of things entrusted into one’s care, and in the case of a mineral resource it means the responsible planning, and sustainable development and utilization of resources, while safeguarding the interests of all stakeholders. NUA members accept the responsibilities of uranium stewardship by building partnerships throughout the life cycle of the product to ensure that production, use and disposal are consistent with the global sustainable development goals. Uranium exploration and mining projects in Namibia take place in a cluster, and there are therefore cumulative impacts rather than individual impacts of isolated operations. The area is characterized by aridity, vast desert landscapes, scenic beauty, extraordinary biodiversity and endemism, and heritage resources. Many activities occur in two National Parks, and an integrated approach is required to ensure co-existence of industrial activities and conservation, as well as tourism, hence exploration for and mining of uranium needs to be balanced with environmental protection values. In practice, accepting uranium stewardship therefore includes

As part of its stewardship mission, NUA has established the Namibian Uranium Institute (NUI). NUI is guided by respected independent scientists who serve on NUA’s Scientific Committee. The main purpose of the NUI is to provide a platform for NUA members to work together to improve safety and health performance through the identification of world-class leading best practices and their implementation; to act as a communication hub for the uranium industry in Namibia; and to promote knowledge and capacity building in specialised skills in the fields of environmental management, radiation safety and health. NUI is therefore working closely with the Namibian government and its agencies, and also has close ties with the Namibian University of Science and Technology.

From the start, exploration and mining companies involved in the Namibian uranium sector have fully recognized that managing environmental issues, radiation, health and safety, and waste is of paramount importance in order to protect staff, the general public and the receiving environment. Responsible management of uranium mining and processing applies at all stages from planning, exploration, development and construction to operations, sale, transport and finally decommissioning. This can best be achieved in a coordinated way with interaction of all players involved, and NUA is the vehicle of choice to accomplish this.

NUA works towards a balance of environmental protection values and exploration for and mining of uranium. The Association also addresses the social and cultural needs of communities in the area, people employed by the uranium industry, as well as business and economic imperatives of the respective shareholders. NUA promotes the principle of zero harm and universal adherence to the World Nuclear Association’s policy document on uranium mining standards. It also ensures adherence to strong sustainable development performance through compliance and indeed active participation in the Strategic Environmental Management Plan implemented by the Namibian Ministry of Mines and Energy. NUA strongly supports a coordinated and joint strategic approach by industry and government to ensure sustainable economic development in the Erongo Region and beyond. NUA is also guided by Namibia’s Vision 2030, the UN 2030 Sustainable Development Agenda, the African Consolidated Position on the UN Agenda, and the African Union Agenda 2063.

On environmental matters, the Director of NUI works in close cooperation with the International Atomic Energy Agency (IAEA), and is a member of a number of working groups of the World Nuclear Association, which also deal with environmental issues such as radiation safety and decommissioning of nuclear facilities. She is also a member of the Environmental and Social Committee of the Chamber of Mines of Namibia, which works towards expanding the industry’s contribution to socio-economic development in Namibia, while preserving the natural environment and ecosystems that are impacted by mining operations. In 2021, work continued with UNESCO’s Global Geopark Council, and the NUI Director was elected chair of Namibia’s Geopark Interim Task Force, providing an opportunity to highlight the environmentally responsible way in which the industry operates within a proposed future Namibian Geopark. NUI provided information to the Ministry of Environment, Forestry and Tourism for the preparation of their management plans for the coastal national parks, in which part of the industry operates. NUA is also a member of the Recycle Forum Namibia.

Strategic Partnerships
NUA fosters a number of strategic partnerships in order to promote the Namibian uranium brand. Interaction with the Namibian Government is indispensable, and includes regulators such as the Ministry of Mines and Energy (MME); the Ministry of Environment, Forestry and Tourism (MEFT); the National Radiation Protection Authority (NRPA) and the Atomic Energy Board (AEB), both within the Ministry of Health and Social Services (MoHSS); as well as the Ministry of International Relations and Cooperation (MIRCO), with the Director of NUI serving as a member of the National Technical Working Group on Namibia’s Application for membership of the Nuclear Suppliers Group. In response to the pandemic situation, NUA is also represented on the Regional Coordination Committee of the Erongo Region Directorate of the MoHSS. Contact is also maintained with the International Atomic Energy Agency (IAEA), and the NUI director has continued to work on a Namibian case study for a forthcoming IAEA publication on milestones in the nuclear fuel cycle. The Government Mining Company Epangelo Mining is a member of NUA. A close relationship with the relevant municipalities, the Erongo Regional Governor and the Erongo Development Foundation guarantees that NUA keeps abreast with local developments and Corporate Social Responsibility requirements. Interaction with the parastatals NamWater, NamPower, TransNamib and NamPort ensures up-to-date knowledge about the provision of essential services.

The quality of training and research is addressed through interaction with the Namibian University of Science and Technology (NUST) and Bern University, Switzerland, with three members of NUA’s Scientific Committee coming from these institutions. There is of course regular contact with the Namibian Chamber of Mines, and the NUI director is a member of the Chamber’s Exploration and Environmental and Social Committees. NUA is also a member of the World Nuclear Association (WNA), where the Director of NUI participates in a number of working groups, namely the Working Groups on Radiological Protection, on Waste Management and Decommissioning, on Transport, and on the Nuclear Fuel Report.

NUA holds membership of the Namibia Scientific Society, the Swakopmund Scientific Society (member of the board), and the Recycle Namibia Forum. Furthermore, the Director of NUI serves as Vice-Chairperson of the National Committee for the Implementation of the World Heritage Convention in Namibia, and as Chairperson of its Technical Subcommittee, which is an important partnership taking into consideration that NUA members are operating on the doorstep of the Namib Sand Sea World Heritage Site. The Director of NUI is furthermore serving on the scientific board of the UNESCO’s International Geoscience Programme, and on UNESCO’s Global Geopark Council.

Compliance and Enforcement
The Namibian uranium industry is subject to the provision of a number of legal instruments, in particular the Minerals Act, 1992 (Act 33 of 1992) the Atomic Energy and Radiation Protection Act, 2005 (Act No 5 of 2005) and its Regulations, the Environmental Management Act, 2007 (Act 7 of 2007), as well as international agreements such as the Convention on the Physical Protection of Nuclear Material, the Treaty on the Non-Proliferation of Nuclear Weapons, and the Comprehensive Nuclear Test Ban Treaty. Other commitments result from Namibia’s membership of the International Atomic Energy Agency (IAEA).

NUA members are operating according to international best practice, as enshrined in NUA’s Constitution and Code of Conduct. They are setting a high standard through their commitment to product stewardship, and have at all times been in compliance with the instruments listed above. In addition, NUA’s contribution to the implementation of the Ministry of Mines and Energy’s Strategic Environmental Management Plan for the Uranium Province further ensures the industry’s performance in the best interest of Namibia and her people.

Uranium has been one of the commodities to register two consecutive years of gains despite the pandemic, and analysts believe it is set to rise even more in 2022. What is the background of that?

China continues with it’s plans to build at least 150 nuclear reactors in the next 15 years in order to achieve carbon neutrality by 2060. The US Congress allocated more than US$ 8.5 billion to further nuclear power generation. The UK continued it’s clean energy transition towards nuclear power, and France is planning research on Small Modular Reactor technology, mass production of hydrogen using nuclear energy, and building of new reactors. The United Nations Economic Commission for Europe confirmed nuclear energy as having the lowest lifecycle carbom emissions of any energy source, including renewables. At the same time, the World’s largest uranium producer Kazatomprom has curtailed production, Canada’s McArthur River remained under Care and Maintenance, and Autralia’s Ranger Mine and Niger’s Cominak Mine ceased operations. The 2021 world production of 58 000 t U3O8 accounted for only 67% of the market demand of 87 000 t U3O8.

Experts are predicting that global utility uncovered uranium requirements will rise tremendously. The resulting deficit has the potential to drive the price, which will enable new uranium projects to be developed. Namibia’s endowment of uranium resources is available to make an important contribution providing fuel for nuclear power generation. Moreover, the Namibian Goverment is exploring ways and means to perhaps utilise this endowment at home in the future. The Namibian uranium industry already provides some 10% of the World’s uranium, and stands ready to provide supply for an increased demand, while making valuable contributions to the uplifting of living standards of the communities in which the industry operates. Moreover, NUA members assure that such supply is explored for, mined, and processed in accordance with international best practice, the sustainable development goals and NUA’s own stewardship principles.

NUA BOARD OF TRUSTEES 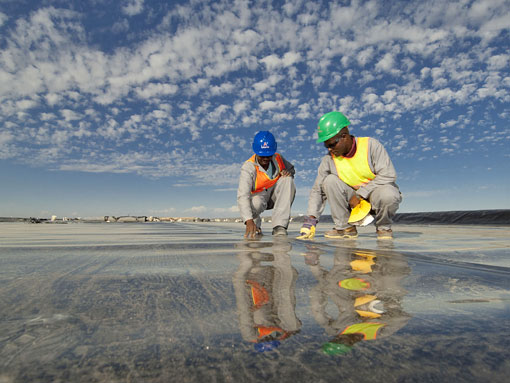